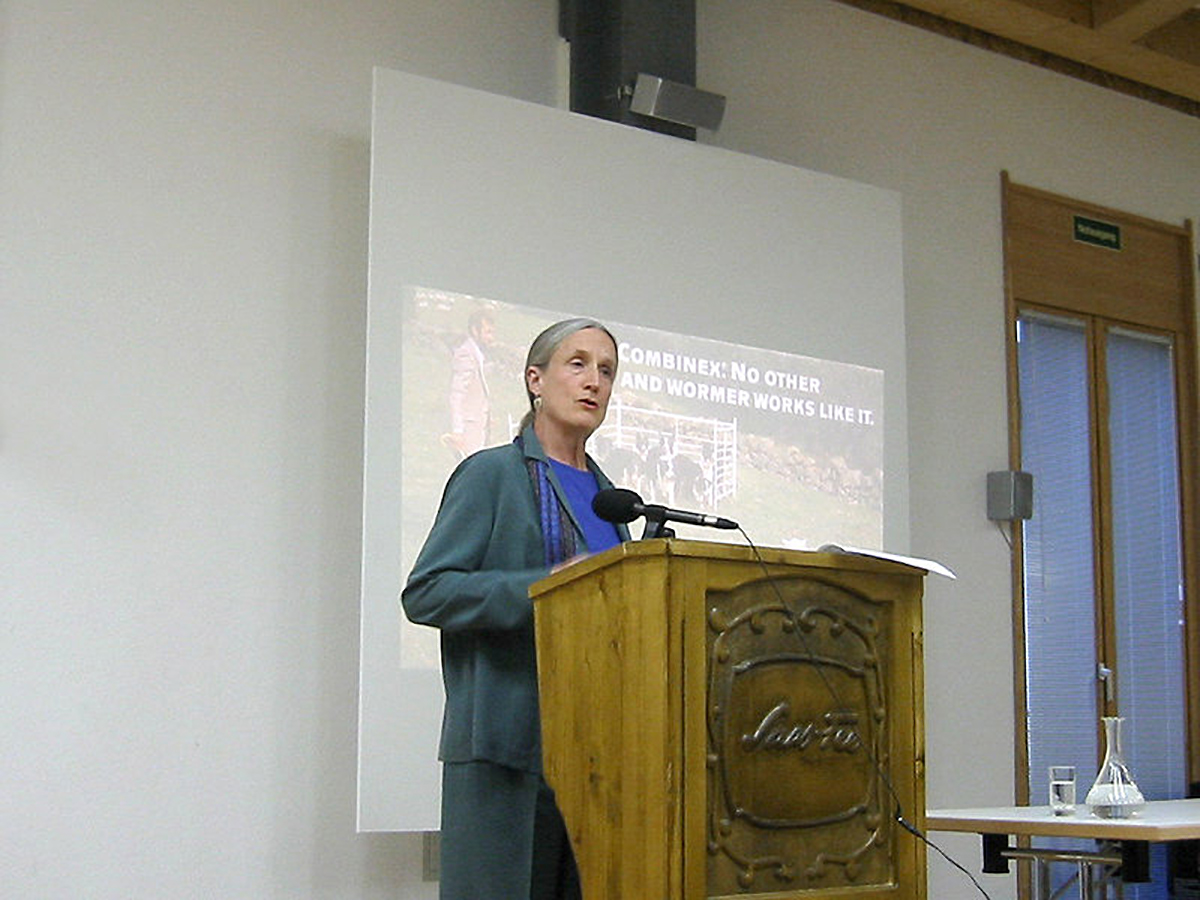 Donna Haraway (b. 1944 in Denver, Colorado) is Distinguished Professor Emerita in the History of Consciousness Department and in the Feminist Studies Department at the University of California, Santa Cruz. In 2002, she was awarded the J.D. Bernal Prize, the highest honor given by the Society for Social Studies of Science, for lifetime contributions to the field.

Haraway studied zoology and philosophy at The Colorado College, where she received a Boettcher Foundation scholarship. Having studied in Paris under a Fulbright scholarship, she completed her PhD in Biology at Yale in 1972 with a dissertation entitled “The Search for Organizing Relations: An Organismic Paradigm in 20th-Century Developmental Biology”, traversing the fields—and departments—of biology, philosophy, and history of science and medicine.

Having taught (history of) science and women’s studies at the University of Hawaii (1971-1974) and at Johns Hopkins University (1974–80), she joined the History of Consciousness program at Santa Cruz in 1980.

Haraway’s most famous essay was published in 1985: “A Manifesto for Cyborgs: Science, Technology, and Socialist Feminism in the 1980s” (Socialist Review, no. 80) “is an effort to build an ironic political myth faithful to feminism, socialism, and materialism”. The image of the cyborg (=“a cybernetic organism, a hybrid of machine and organism, a creature of social reality as well as a creature of fiction”) underlines two main arguments: “first, the production of universal, totalizing theory is a major mistake that misses most of reality[…] second, taking responsibility for the social relations of science and technology means refusing an anti-science metaphysics, a demonology of technology, and so means embracing the skillful task of reconstructing the boundaries of daily life, in partial connection with others, in communication with all of our parts.”

The “cyborg imagery” outlined thus “can suggest a way out of the maze of dualisms in which we have explained our bodies and our tools to ourselves. This is a dream not of a common language, but of a powerful infidel heteroglossia. […]It means both building and destroying machines, identities, categories, relationships, space stories.”

Primate Visions: Gender, Race, and Nature in the World of Modern Science, published in 1989 (Routledge), focuses on primate research and primatology: “My hope has been that the always oblique and sometimes perverse focusing would facilitate revisionings of fundamental, persistent western narratives about difference, especially racial and sexual difference; about reproduction, especially in terms of the multiplicities of generators and offspring; and about survival, especially about survival imagined in the boundary conditions of both the origins and ends of history, as told within western traditions of that complex genre”.

The essay collection Simians, Cyborgs, and Women: The Reinvention of Nature(Routledge 1991) delineates “off boundary creatures—simians, cyborgs, and women—all of which had a destabilizing place in the great Western evolutionary, technological, and biological narratives.”

“The real and imaginary field” for (and of) Modest_Witness@Second_Millennium. FemaleMan©_Meets_OncoMouse™. Feminism and Technoscience (Routledge, 1997), for which she received the Ludwik Fleck Prize in 1999, is the “fiercely physical and semiotic world of technoscience”.

The Companion Species Manifesto: Dogs, People, and Significant Otherness (Prickly Paradigm Press 2003) is to be read as “a personal document”, “a story of co-habitation, co-evolution, and embodied cross-species sociality”, “a story of biopower and bioscociality, as well as of technoscience”; similarly, When Species Meet(Minneapolis: University of Minnesota Press, 2008) tackles questions of “intra- and interaction”, asking “who ‘we’ will become when species meet”.

Staying with the Trouble: Making Kin in the Chthulucene (Duke University Press, 2016) is, as its name implies, “about staying with all this trouble. It is about a becoming-with-each-other in another new term: what I’m calling the chthulucene. This can’t be done in the mode of critique, which is never enough. In the chthulucene, critique is one of many practices tempered by others that lead to an opening of what is still possible. Chthulu comes from chthonic—the earthly powers and processes—human too, but much more than human. But this isn’t some sort of ancient, destroyed-by-modernity story. It’s an ongoing and present story. These chthonic powers, forces, and entities are coupled with the suffix –cene, drawn from kainos, or the thick now, the present, which is not instantaneous but extends into many kinds of time, into presence. Into cultivating response-ability.” [1]