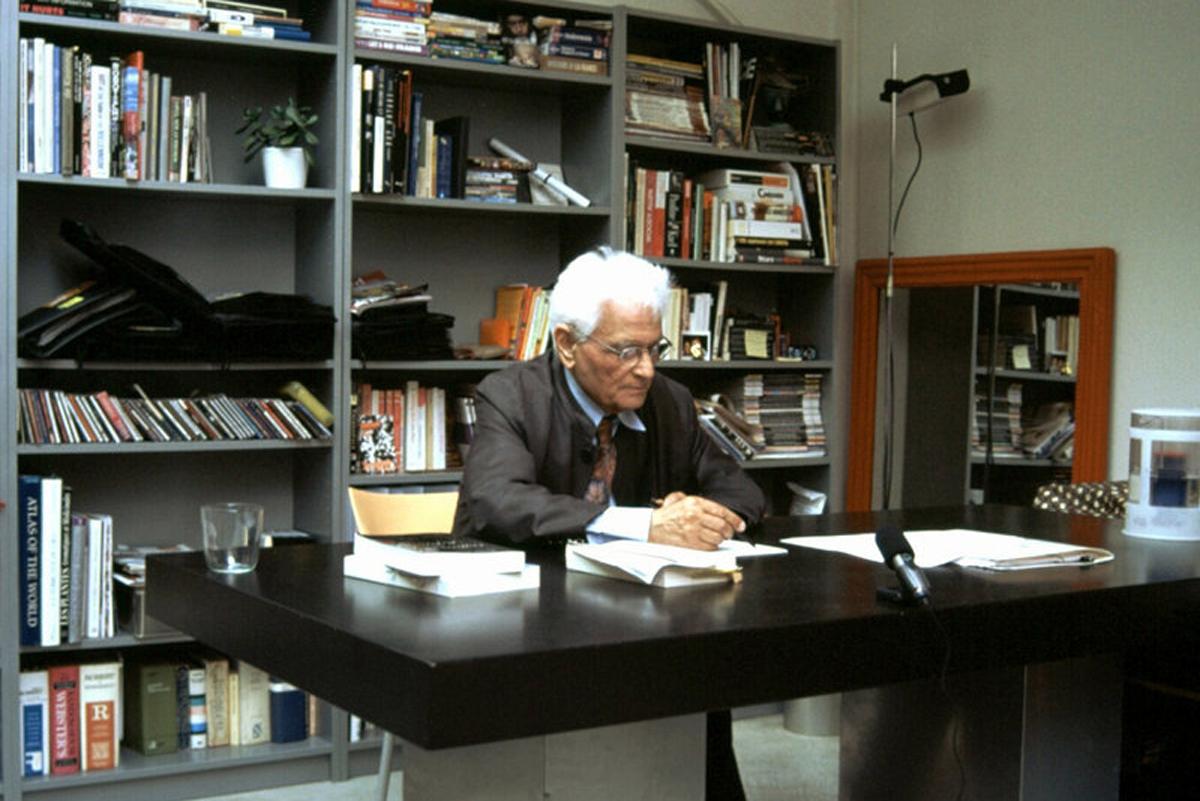 Jacques Derrida, Ph.D., was born to an Algerian Jewish family in El-Biar, Algeria, in 1930 and died on October 9, 2004. At the age of 22, he moved to France and began studies at the École Normale Supérieur in Paris, focusing on the phenomenology of Edmund Husserl. Of particular interest for Derrida is the analysis of écriture, the writing of philosophy itself. He published several articles in the 1960’s for Tel Quel, France’s forum of leftist avant-garde theory. During the first half of the decade, he taught at the Sorbonne in Paris. He wrote reviews on publications devoted to history and the nature of writing, which appeared in the latter half of the 1960’s in the Parisian journal, Critique. These works would be foundational to Derrida’s highly influential work, Of Grammatology. Derrida was introduced to America in 1967 by the Johns Hopkins University, where he delivered his lecture “Structure, Sign, and Play in the Discourse of the Human Sciences.”

Jacques Derrida taught at the Ecole Normale Supérieur from 1965 to 1984, dividing much of his time between Paris and American universities such as Johns Hopkins and Yale. He is currently the director at the École des Hautes Études en Science Sociales in Paris. Since 1986 he has also been Professor of Philosophy, French and Comparative Literature at the University of California, Irvine and continues to lecture in academic institutions on both sides of the Atlantic.

Derrida published three books in 1967-Speech and Phenomena; Of Grammatology; and Writing and Difference, which outline the deconstructive approach to reading texts. In Of Grammatology, in part influenced by his friend and peer, Emmanual Levinas, Derrida analyzes and criticizes Western Philosophy beginning with the pre-Socratics to Heidegger. He challenges the fundamental privileging of “logos” in Western Philosophy with its claims to authenticity in the proposition of a direct link between speech and act in its form, which Derrida reveals as having the presence of a centre of identity and/or subjectivity. This privileging of logos denigrates the practice of writing, though paradoxically many philosophers attempted to reveal the nature of speech of the written text to reconcile the challenge. Derrida, however, would go on to develop a method of identifying such patterns within the act of writing, which he termed “deconstruction.” Deconstruction seeks to identify logocentric paradigms, such as dichotomies, and show that the possibility of presence within any contextual language is in constant “play” and “differs” continuously in relation to something else, leaving only a “trace” of the subject/object. Derrida introduced words such as “trace,” “presence,” “difference,” “deconstruction,” “logos,” and “play” to the lexicon of contemporary discourse in structuralism, post-structuralism, post-modernism and post-colonialism. The strategy is not an attempt to remove paradoxes or contradictions or escape them by creating a system of its own. Rather, deconstruction embraces the need to use and sustain the very concepts that it claims are unsustainable. Derrida was looking to open up the generative and creative potential of philosophy. Deconstruction has also been applied as a strategy of analysis to literature, linguistics, philosophy, law and architecture.

Différance is a term Derrida coined in 1968 in response to structuralist theories of language such as Saussure’s structuralist linguistics. While Saussure managed to demonstrate that language can be shown to be a system of differences without positive terms, it was Derrida who opened the full implications of such a conception. There is an unconceptualizable, unperceivable dimension in language in the thinking of difference without positive terms making difference itself the prototype of a remainder outside Western metaphysical thought -it is thus the very condition of the possibility of Western thought. Such a conception of difference is not brought into an order of the same in language through any concept, common sense or given identity, nor is difference an identity, nor is it between two identities. It is the deferral of difference — différance. Derrida developed terms whose structures are inherently double in this manner: pharmakon (both poison and cure), supplement (both surplus and necessary addition, and hymen (both inside and outside).

Further to Derrida’s critique of structural linguists is the limited and colloquial definition of writing they used in the championing of speech. Writing is seen here to be graphic, empty of all complexities, fundamentally phonetic (and hence a representation of the sound of language) utile for memory but secondary to speech. Speech is considered by the structuralists to be closer to the thought, primary emotions, intentions and ideas of the speaker. Derrida introduces a graphic element into his spelling of différance that cannot be detected by the voice. The effect of punctuation and spaces in the body of the text is another example of the unrepresentable dimensions available to writing, revealing both that writing cannot be thought of as entirely phonetic, nor that speech is entirely auditory. Spaces in writing are perceptible as the unpresentable silences in speech.

Derrida’s oeuvre could be viewed as an exploration of the nature of writing in the broadest sense as différance. To the extent that writing always includes pictographic, ideographic, and phonetic elements, it is not identical with itself. Writing, then, is always impure and, as such, challenges the notion of identity, and ultimately the notion of the origin as ‘simple’. It is neither entirely present nor absent, but is the trace resulting from its own erasure in the drive towards transparency. Writing is neither essential nor phenomenal, it is not what is produced but what allows for the possibility of production. In meditations on themes from literature, art and psychoanalysis, as well as from the history of philosophy, part of Derrida’s strategy is to make visible the ‘impurity’ of writing (and any identity), often by deploying rhetorical, graphic, and poetic strategies at once. Blurring boundaries between disciplines in his texts, such as in Glas (1974) or The Post Card: From Socrates to Freud and Beyond (1980), Derrida shows the inseparable nature between the poetic and/or rhetorical, signifying element of a text, and the content or meaning, the signified element of the text

Derrida has maintained a strongly political presence, fighting for the rights of Algerian immigrants in France, against apartheid, and for the rights of Czech Charter 77 dissidents. He seeks a consistency in his lived, political reality to his philosophy, attempting to live with as little dichotomy as possible. His works are of the most frequently cited by other academics in a wide range of fields, particularly in literary criticism and philosophy.

In 2003, Derrida was diagnosed with pancreatic cancer. Only one year later Jacques Derrida passed away in a hospital in Paris, France on the evening of October 8, 2004. His influence on contemporary philosophy is undeniable and he is beyond a doubt one of the most influential philosophers of the twenty first century.

The Notion of Stupidity