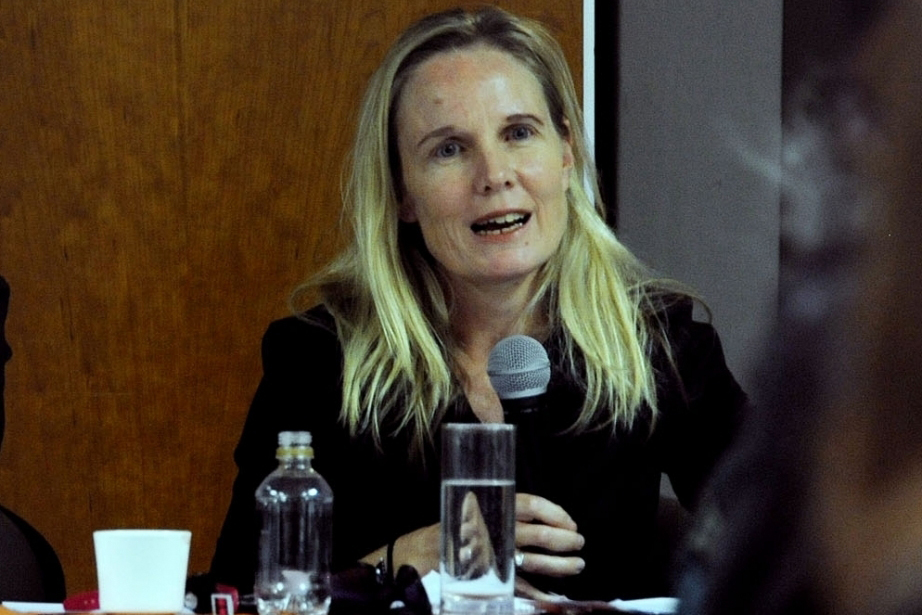 Sarah Nuttall is Professor of Literary and Cultural Studies and Director of the Wits Institute for Social and Economic Research at the University of the Witwatersrand, Johannesburg, South Africa. Before taking up this position in 2013, she was a Senior Researcher at the same institute from 2000 to 2010.

She is the author of the monograph Entanglement: Literary and Cultural Reflections on Post-apartheid (Witwatersrand University Press 2009), which offers an “exploration of post-apartheid South African life worlds. Entanglement aims to capture the contradictory mixture of innovation and inertia, of loss, violence and xenophobia as well as experimentation and desegregation, which characterises the present. […]In the process, she moves away from a persistent apartheid optic, drawing on ideas of sameness and difference, and their limits, in order to elicit ways of living and imagining that are just starting to take shape and for which we might not yet have a name.”

The author of numerous articles in journals such as “Cultural Studies”, “Social Dynamics”, “Journal of Southern African Studies”, “Public Culture” or “Theory, Culture & Society”, to name but a few, Nuttall has edited several books:

Text, Theory, Space: Land, Literature and History in South Africa and Australia (Routledge, 1996), edited with Kate Darian-Smith and Liz Gunner, is considered “a landmark text in post-colonial criticism and comparative studies. This timely book is the first to investigate nineteenth- and twentieth-century South Africa and Australia as distinctive imperial and post-colonial spaces in geographical, historical and literary terms. It draws together writers who address questions of identity, ethnicity, race and gender in the formation and expression of contemporary South African and Australian cultures.”

Exploring various “instantiations of the aesthetics of Africa and its diasporas”, Beautiful/Ugly: African and Diaspora Aesthetics (Duke University Press 2007) asks:”[H]ow are ideas of beauty reconfigured? Scholars and artists take up that question in this invigorating, lavishly illustrated collection, which includes more than one hundred color images. Exploring sculpture, music, fiction, food, photography, fashion, and urban design, the contributors engage with and depart from canonical aesthetic theories as they demonstrate that beauty cannot be understood apart from ugliness.”

Together with Achille Mbembe Nuttall edited Johannesburg – The Elusive Metropolis (Duke University Press 2008), “a pioneering effort to insert South Africa’s largest city into urban theory, on its own terms.[…] the contributors to this collection reassess classic theories of metropolitan modernity as they explore the experience of ‘city-ness’ and urban life in post-apartheid South Africa. They portray Johannesburg as a polycentric and international city with a hybrid history that continually permeates the present. […]Journalists, artists, architects, writers, and scholars bring contemporary Johannesburg to life in ten short pieces, including reflections on music and megamalls, nightlife, built spaces, and life for foreigners in the city.”

Nuttall is also co-editor of the collections Load-Shedding: Writing on and Over the Edge of South Africa (Jonathan Ball 2009, with Liz McGregor ), “a collection of non-fiction stories from South Africa’s pre-eminent authors, journalists and commentators”, and Negotiating the Past: The Making of Memory in South Africa (Oxford University Press 1998, with Carli Coetzee), a “collection of essays by leading South African writers and academics, who offer provocative insights into how South Africans remember the past during the transition to democracy.”

An Oppenheimer Fellow at the Du Bois Institute at Harvard University in 2016, her current research focuses on “The Anthropocene, African Aesthetics and the Politics of Form”.