Emmanuel Levinas Chair and Professor of Philosophy and Comparative Literature at The European Graduate School / EGS. 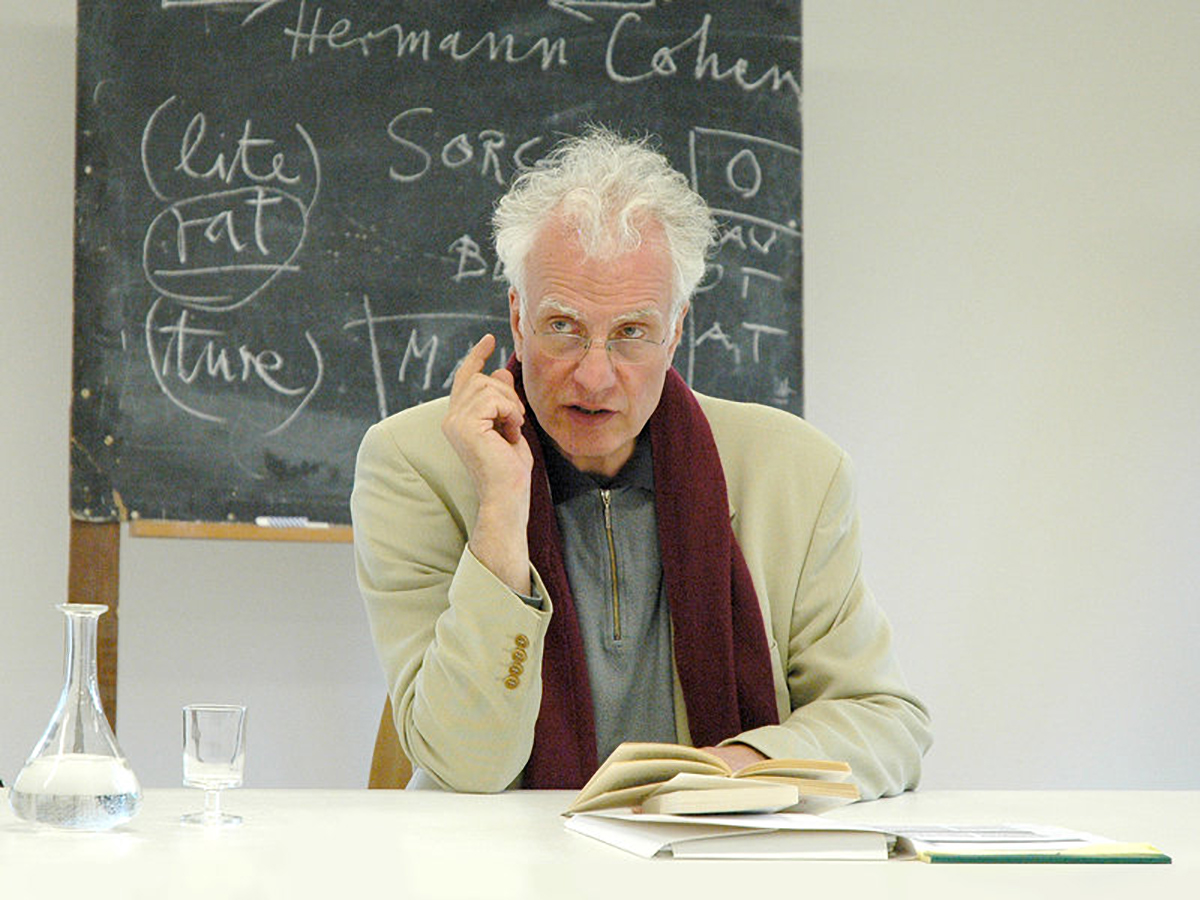 Werner Hamacher (b. 1948) is the Emmanuel Levinas Professor at The European Graduate School / EGS, and Professor Emeritus of General and Comparative Literature at Goethe Universität, Frankfurt am Main. A remarkably original and highly influential scholar in the continental tradition, Professor Hamacher is a polyhedric thinker whose philosophical endeavor engages in a relentless deconstructive reading of Western metaphysics, concepts, and cultural phenomena. His research interests span continental philosophy, philology, literature, hermeneutics, law, politics, and aesthetics. This multifaceted ground has shaped Hamacher’s intellectual and academic career resulting in exemplary teaching in both Europe and the United States, extraordinary scholarship, and a cross-cultural pioneering œuvre in translation and editorial projects including the renowned Stanford University Press series Meridian: Crossing Aesthetics (named after Paul Celan’s poignant speech on poetry).

Born in Germany in 1948, Hamacher studied comparative literature, philosophy, German studies, sociology, and religious studies at the Freie Universität Berlin, where he received his doctorate in 1977 with a dissertation on Hegel’s dialectical hermeneutics. Augmenting his scholarship, Hamacher continued his studies in Paris at l’École normale supérieure working with Jacques Derrida, whose works and thinking made him an integral mentor to Hamacher. Following, the work and thought of Paul De Man also had a strong and long-lasting impact on the Hamacher’s research. He arrived in the United States in 1984 with a professorship in the German and Humanities Departments at Johns Hopkins University, where he remained until 1998. Hamacher then returned to Europe and became a professor in general and comparative literature at the Goethe Universität, Frankfurt am Main and Director of the university’s Institute for General and Comparative Literature. From 2003–07, Hamacher was also Global Distinguished Professor of German at New York University and has been a guest professor at many institutions, among them the Freie Universität Berlin, the Franz Rosenzweig Center of the Hebrew University in Jerusalem, the Amsterdam School for Cultural Analysis, Yale University, and l’École normale supérieure.

Werner Hamacher is known for being a leading figure, liaison, between the North American, French and German philosophical and literary traditions, through his translations of significant works by, among others, Jacques Lacan (whom he introduced to German readers), Jean Hyppolite, Paul de Man, Nicolas Abraham, Jean Daive and Jorie Graham, and his editorial volumes, such as, Paul de Man: Wartime Journalism 1939-1943, Responses – on Paul de Man’s Wartime Journalism, Paul Celan, Nietzsche aus Frankreich. This fundamental role he continues to bridge through contemporary continental and critical thinking. Among his major works are: Premises – Essays on Philosophy and Literature from Kant to Celan (Peter Fenves, translator), pleroma: Reading in Hegel (Nicholas Walker and Simon Jarvis, translators), and Minima Philologica (Catherine Diehl and Jason Groves, translators).

In pleroma: Reading in Hegel, Werner Hamacher examines the terms under which philosophy is still possible after the transformation Hegel’s thought caused within the structure of philosophical concepts. His analysis is both historical and systematic, starting with Hegel’s early writings following the transformation of Hegel’s thought into his later works. The concept for Hegel is where the thing ends, carrying with it the traces of its “splitting” with its “representational content,” and how “according to the logic of the turning point” the dialectical procedure essentially fails: “its unity dissolves, the pores turn into aporias, wherever conceptual exigencies surpass the reality they have instilled.” Including Immanuel Kant, Friedrich Nietzsche, Karl Marx and Sigmund Freud into his investigation, Werner Hamacher emphasizes the limits and excesses of Hegel’s thought. By showing that dialectics fails to realize its own movement, Hamacher directs his argument on the elements which resist spiritualization. If speculative idealism is to be the “last philosophy,” then “Hegel’s system must be read from the point where its rupture fails to converge with its end.” The notion of nausea is located at this point, where the system discharges foreign elements. The discourse for this indigestible and unreadable part, according to Werner Hamacher, has yet to be created. “What remains—the indigestible, the unreadable, the nondiscursive—demands yet another kind of discourse and another practical gesture: toward a pleroma other than Hegel’s.”

Werner Hamacher brings together the issues of critical literature and philosophy, investigating crucial texts of modernity, in Premises – Essays on Philosophy and Literature from Kant to Celan. Opening his discussion with the notion of understanding, Hamacher defines thus as a performative act that cannot be stabilized as an essence or a paradigm, shaken by the discovery of its other, the uncomprehendable and incomprehensible. Understanding must understand itself from its impossibility, dismantling the security of the previous knowledge created on the basis of correspondence between subject matter and the structure of the sentence. Werner Hamacher further shows the simultaneous unavoidability and unattainability of a subject position, open to redefinitions of the constituting act. To give a comprehensive account of such disruption after Kant’s critique of the subject Hamacher addresses, “the hermeneutic circle in Schleiermacher and Heidegger, the structure of ethical commands in Kant, Nietzsche’s genealogy of moral terms and his exploration of the aporias of singularity, the irony of reading in de Man, the parabasis of language in Schlegel, Kleist’s disruption of narrative representation, the gesture of naming in Benjamin and Kafka, and the incisive caesura that Paul Celan inserts into temporal and linguistic reversals.” Through these crucial themes and readings of modernity, Hamacher’s Premises, offers not only a valuable insight into philosophical and literary works, but also destabilizes the methods of language in general and the structure of understanding.

One of his most recent works, Minima Philologica is the consummation of Hamacher’s thought on philology. Composed of two independently published texts, “95 Theses on Philology” and “For-Philology,” the book intends to “revitalize philology,” returning to it a use beyond the pedantic applications of the academy: “Hamacher propounds a notion of generalized philology that is equivalent to the real production of linguistic utterances, and indeed utterances not limited to predicative or even discursive statements. Philology, in speaking for language where no clear and distinct language is given, exhibits and exposes the structure of language in general.” Specifically, Hamacher’s contention is that there is an inherent power to language because it routinely moves beyond itself, by demarcating what always still remains to be said. Otherwise stated there is a desire of language—language desires. This desire—philía—according to Hamacher, is an insatiable and irreducible effect of language, and drives it from one phrase to another. In confronting an alien and enigmatic utterance, the speaking being is not only exposed to and thrown into a world that pre-exists it, but is driven down roads the ends of which cannot be foreseen. As a result, this desire of language forces the acceptance of ignorance, loss and uncertainty, and demands that one thinks in and through language, its relations, tensions, and lacks. In fact, for Hamacher, to practice philology is to assume this desire of language, to open thought to its frightening excesses. Following, the model form of this moving structure of language is poetry. “95 Theses on Philology,” in addition to outlining the resources and capability of philology and language, also presents a direct challenge to the limitations imposed on the subject by contemporary scholarship. “For—Philology,” on the other hand, engages the thoughts of great philological thinkers such as Plato, Nietzsche, Benjamin, Schlegel, and Heidegger, as well as poets such as Francis Ponge, Friedrich Hölderlin, Paul Celan, and Rene Char. “Taken together, the two essays collected in Minima Philologica constitute a manifesto for a new understanding of linguistic existence that breaks new ways of attending to language and those who live by it.”

The End of Beauty and Swarm