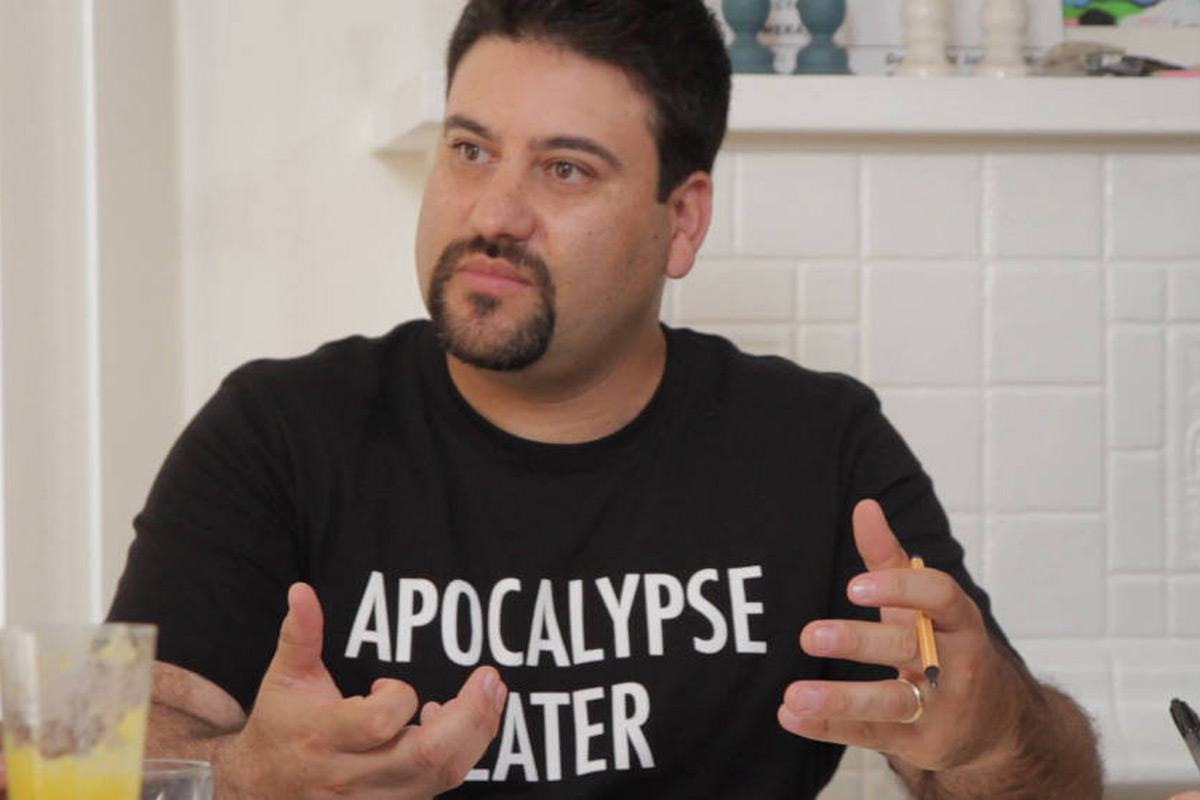 Pirooz Kalayeh loves combining his multifaceted experiences as an artist, musician, writer, actor, and director to create new hybrids and innovations in storytelling. Formerly a neuroscience major and obedient first generation immigrant, Pirooz broke with tradition and gave heart attacks to Iranian parents everywhere by joining musical group Cecil’s Water and touring with such acclaimed artists as The Caulfields, The Toasters, Ruder Than You, Spindrift, The Verge, and others.

He obtained a BA in English Literature from The University of Delaware and an MFA in Creative Writing from The Jack Kerouac School of Disembodied Poetics. His multicultural stories, poetry translations, and corporate satires have been widely published in journals and anthologies, including Looking Back (New Brighton Books, 2003), Wigleaf, Ducts, Past Simple, Horseless Press, and No Tell Motel.

Poet Jim Goar describes his debut novel The Whopper Strategies as “a book that demystifies and devours our corporate culture”, while screenwriter and novelist Charles Yu commends it for being “like nothing you have read before” and novelist Laird Hunt calls him “a writer to watch.”

In 2008, Pirooz left Hollywood for a two year exploration of Asia, where he produced Transistor Radio with musical group The Slipshod Swingers, interviewed artists and filmmakers on his blog Shikow, and wrote the screenplay that would lead to his eventual return stateside for a directorial debut.

In 2012, Pirooz’s first feature SHOPLIFTING FROM AMERICAN APPARELwas released by Indie Screen and played to sold out audiences across America, with Dead End Follies’ Benoit Lelievre extolling the film for requiring “every bit of your wits” and not being a “sit-and-watch, turn-your-brain-off movie.”

In 2005, Pirooz continued his exploration in storytelling as an Associate Producer and Post Production Coordinator at Weller Grossman Productions. Some of the national television programs he worked on include STRICTYLY SEX WITH DR DREW (DISC), CRAFTLAB (DIY), and LOOK WHAT I DID (HGTV).

His documentary feature about Buddhist teacher Brad Warner BRAD WARNER’S HARDCORE ZEN (2013) premiered at the Buddhist Film Festival in Amsterdam on October 5, 2013, played in select theaters across the United States and Europe, and was featured in major Buddhist publications and city papers, such as Lion’s Roar, The Daily Camera, and Nomos Journal.

THE HUMAN WAR (2014) was co-produced and co-directed by Pirooz and premiered at the Beloit International Film Festival on February 21, 2014, played select theaters across America, and is currently streaming on eFilm Torrelodones in Spain.

ZOMBIE BOUNTY HUNTER M.D. premiered at On Vous Ment Film Festival in Lyon, France on May 24, 2016 and is streaming on Vodd (a new French SVOD service launched in January 2016).

Pirooz’s films have been featured in L.A. Weekly, Village Voice, Vice, and Indiewire. L.A. Weekly calls him “an energetic and loquacious multi-hyphenate” with Indiewire labeling SHOPLIFTING… as “five projects we’re rooting for” and Village Voice crediting him for “capturing much of the tone of the novella.”

Pirooz is the recipient of the Zora Neale Hurston Scholarship Award from Naropa University and a Best Screenplay Award for THE HUMAN WAR. He is currently working on several original series and film narratives, including the much-anticipated drama CTRL ALT DEL and the Buddhist documentary DON’T BE A JERK.

Pirooz is a PhD student in Media and Communication at The European Graduate School. His dissertation is on Digital Media and New Hybrids within Contemporary Iranian Cinema. His instructors include Terrence Mallick, Wim Wenders, Mike Figgis, and Barbara Hammer.

Coinciding with his professional work in film and television, exhibitions, and musical and theatrical performances, Pirooz has continued to teach screenwriting, cinema studies, creative writing, acting, and film production courses to a diverse array of students around the globe, including UCLA Extension, The American Musical and Dramatic Academy, Yonsei University, Monroe Community College, Compton Community College, and Naropa University.