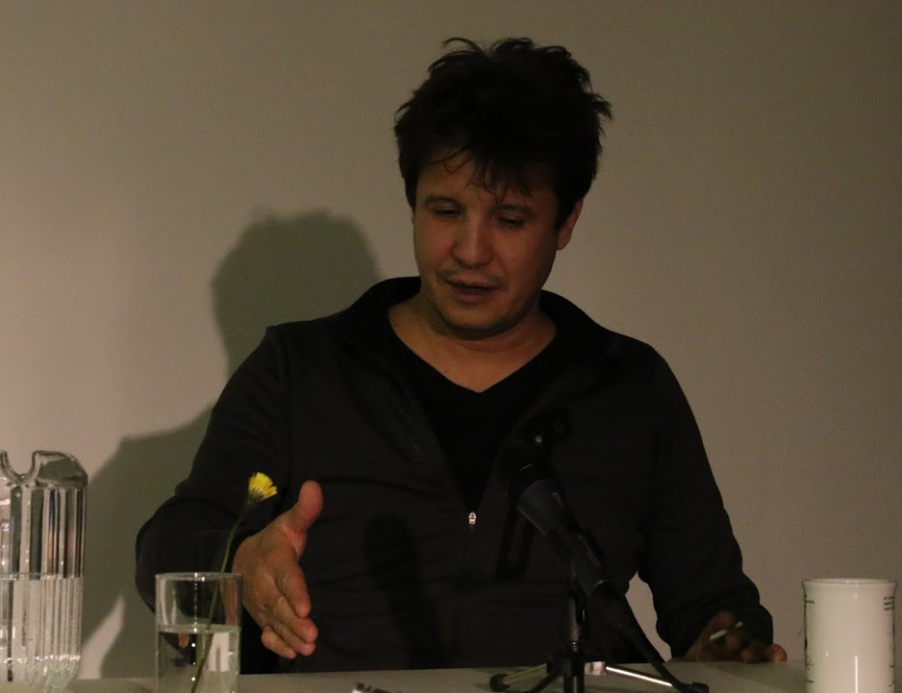 Adel Abdessemed (b. 1971) is a French-Algerian artist. He embraces a wide variety of media, and his work includes installations, videos, photography, sculptures, drawings, and books. His oeuvre is characterised by brutal imagery that attempts to depict the inherent violence of the contemporary world. His works often deal with the themes of war, violence, and religion.

Abdessemed was born in Constantine, Algeria where he attended the Fine Arts School in Batna and the École Supérieure des Beaux-Arts. In 1992, while he was still a student, a military coup occurred in his country; more than 100,000 people lost their lives in the subsequent violence. This is why Abdessemed says: “The violence that I talk about, I experienced it very directly. To this day, the wounds stay open, and the questions remain unanswered: the arson attacks, the mass rapes, the unpunished murders.” After the director of his school, Ahmed Assalah, and his son were murdered on the school premises, Adel Abdessemed emigrated to France and enrolled the École Nationale Supérieure des Beaux-Arts, Lyon. At this school, his work drew the attention of the Swiss curator Hans Ulrich Obrist. In 2000, he obtained a residency at PS1 in New York, and he witnessed the terrorist attacks on the USA in 2001. After the end of his residency, he moved to a Berlin for a short time and then to Paris just before the street riots of 2005. All these events feature prominently in his works.

One of Adel Abdessemed’s most popular works is certainly a five-metre bronze sculpture Coup de tête (2012; Headbutt). It was unveiled at the Centre Pompidou, Paris and it depicts Zinedine Zidane’s famous headbutt of Marco Materazzi that happened in the 110th minute of the 2006 World Cup Final at the Olympiastadion, Berlin. Qatar’s government purchased this sculpture and installed it on the Corniche in the country’s capital, Doha. Jean-Paul Engelen, Qatar’s Director of Public Art, described it in the following way: “It is an impressive piece. It is a huge sculpture, and it is done in the same style as Greek Mythological statues, but this glorifies human defects instead. It shows that although we sometimes treat footballers like gods, they are not – they are just human beings.” However, after the fierce critique from the Islamic conservatives the sculpture had to be taken down and moved together with the other works of Adel Abdessemed in the Arab Museum of Modern Art.

Abdessemed is no stranger to controversy. His work Don’t Trust Me (2008) was shown at the San Francisco Art Institute, and it consists of six looping videos that depict different animals who are being killed by a single blow to the head with a sledgehammer. After fierce protests by animal right activists and death threats to the artist, the show had to be shut down. Wild Animals feature prominently in Abdessemed’s works. For example, Usine (2009) is a minute-and-a-half video that presents a chaos that ensues when various predatory animals (scorpions, Pit Bulls, tarantulas, snakes, etc.) are thrown together into a pit. Mémoire (2011-2012) is again a short and looping video that shows a trained baboon who puts magnetic letters to a white wall thus spelling out the words “Tutsi” and “Hutu” (two opposing ethnic groups involved in Rwandan genocide). A wall-installation, Who’s afraid of big bad wolf (2012), takes its title from the soundtrack to Disney’s classic movie The Three Little Pigs. Abdessemed uses hunting animals frozen in different positions, in this work, and installation “juxtaposes the age-old practice of taxidermy, used for scientific as well as for decorative purposes, with a reference to a meaningless slaughter and war – the animals in the installation have subsequently been burnt and are a monotonous black while the overall dimensions correspond to Pablo Picasso’s Guernica.”

Abdessemed’s installation Hope (2012) addressed the issue of the refugee crisis before it hit the headlines. It started as a charcoal drawing of a boat filled with refugees and it was inspired by Caspar David Friedrich’s The Wreck of Hope. The installation features a real boat that was used for the transport of illegal immigrants to the USA. However, the artist’s additions are cast resin sculptures of garbage sacks with which he filled the boat to the brim. Another installation by Abdessemed, Décor(2011-2012), was inspired by Matthias Grünewald’s Crucifixion. Décor consists of four sculptures of crucified Jesus (in real size) that are made entirely from razor wire. Abdessemed’s “use of a loaded religious icon for a work presented as mere décor is polemical. Its sharp metal barbs have been bent into smooth, rounded submission, and they suggest the sublimation of a tool of oppression – barbed wire, religion – into something else that is acceptable, and even innocuous, like a decorative work of art.”

From Here to Eternity (2015), one of Abdessemed’s latest works, consists of nearly 100 drawings exploring the impact of the embrace. It is inspired by the famous American film of the same name from 1953 which stars Burt Lancaster, Deborah Kerr, Frank Sinatra, and Montgomery Clift. This work also brings Abdessemed’s personal history into focus because, while he was growing up in Algeria, Western movies were censored and scenes that portrayed physical contact between the opposite sexes were cut out from them. In the catalogue for this works Hélène Cixous writes: “Perhaps all of Adel’s work is in the image of the Kiss-Image; it bumps into us, knocks us over, rolls us frantic to the edge of the universe, to the beginnings, where you I the sea the earth thrash about in the ecstasy of genesis.”

Adel Abdessemed has exhibited his work all over the world. He has had exhibitions at numerous major institutions and festivals including Venice Biennale, MAMCO, Geneva, MIT, Cambridge, PS1, New York, Centre Georges Pompidou, Paris and many others.