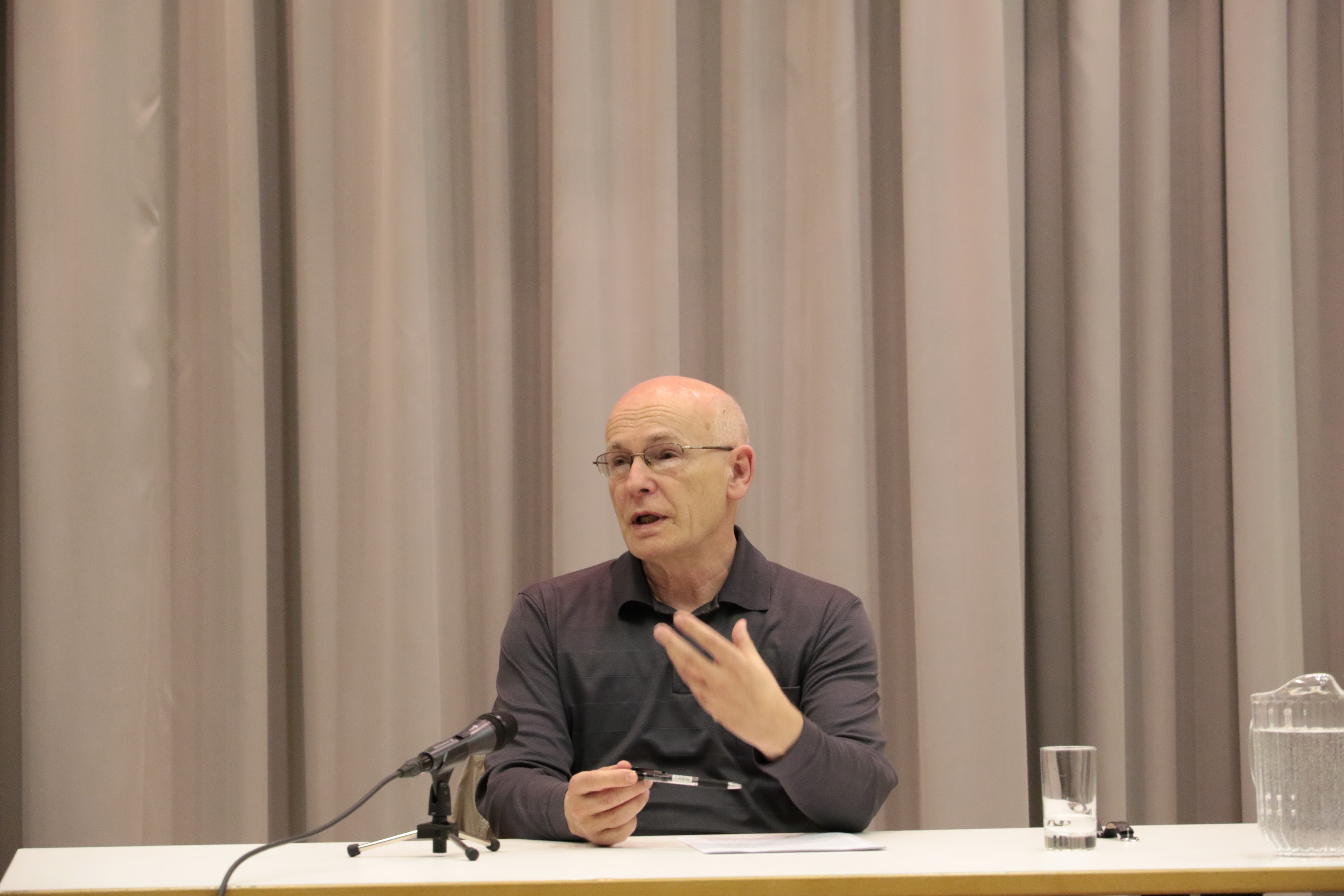 Mladen Dolar (b. 1951), born in Maribor, Slovenia, is a senior research fellow in the Department of Philosophy at the University of Ljubljana, Slovenia, and a professor of philosophy at The European Graduate School / EGS. Dolar’s area of research is within German classical philosophy, German idealism, theoretical psychoanalysis, structuralism, and the philosophy of music and film.

After obtaining a diploma in Philosophy and French from the University of Ljubljana in 1978, Dolar continued his studies at the Université de Paris VIII-Vincennes Saint-Denis (1979–80) and at the University of Westminster, London (1989–90). In 1992, he received a PhD in Philosophy from the University of Ljubljana with a dissertation entitled Heglova Fenomenologija duha. Dialektika zavesti in samozavedanja (Hegel’s Phenomenology of Spirit. Dialectic of Consciousness and Self-consciousness). A member of the Philosophy Department since 1980, Dolar was appointed assistant professor in 1984, “docent” of German Classical Philosophy in 1992, associate professor of Philosophy and Theoretical Psychoanalysis in 1996, and, in 2002, took up his current position as Senior Research Fellow. Other academic appointments include a research stay at the Kulturwissenschaftliches Institut, Essen, Germany (2000–01), at the Jan Van Eyck Academie in Maastricht, Netherlands (2010–12), where he served as an advising researcher on the project After Hegel, and, in the fall of 2013, an appointment as Visiting Scholar in the Department of Germanic Studies at the University of Chicago.

Together with Slavoj Žižek and Rastko Močnik, Dolar founded the infamous “Ljubljana School of Psychoanalysis” in the late 1970s. Their aim was, and continues to be, to combine German Idealism (Hegel in particular), Marxism (with and through the Frankfurt School), and the psychoanalytic theories of Jacques Lacan and Structuralism as a form of analysis in addressing contemporary issues. He is also one of the founders of the Ljubljana-based, and closely affiliated, Society for Theoretical Psychoanalysis, as well as of the Society for Cultural Studies. In addition, Dolar is an editorial board member of both the bi-monthly periodical Problemi, which focuses on psychoanalytic theory, philosophy, and cultural studies, and of the Analecta book series, focusing mainly on translations of key works into Slovenian as well as on the work of Slovenian writers in the field; both are published by the Society for Theoretical Psychoanalysis.

The author of ten books in Slovenian, Mladen Dolar is perhaps best known internationally for Opera’s Second Death (co-authored with Slavoj Žižek, Routledge, 2001) and A Voice and Nothing More (MIT Press, 2006). In the former, “a passionate exploration of opera––the genre, its masterpieces, and the nature of death,” the two authors “explore the strange compulsions that overpower characters in Mozart and Wagner as well as our own desires to die and to go to the opera.” A Voice and Nothing More, which has been translated into six languages thus far, “goes beyond Derrida’s idea of ‘phonocentrism’ and revives and develops Lacan’s claim that the voice is one of the paramount embodiments of the psychoanalytic object (objet a). […] He investigates the object voice on a number of different levels—the linguistics of the voice, the metaphysics of the voice, the ethics of the voice (with the voice of conscience), the paradoxical relation between the voice and the body, the politics of the voice—and he scrutinizes the uses of the voice in Freud and Kafka. With this foundational work, Dolar gives us a philosophically grounded theory of the voice as a Lacanian object-cause.”

Mladen Dolar has published over one hundred papers, articles, and book chapters, many of which have been translated. Some of his most recent publications include the essay/book What’s in a Name (edited by Janez Janša, Aksioma 2014), “There Are More Important Things Than Childhood,” a text “on the glorification of childhood through Kafka and Oedipus” (in Janez Janša, Life II [in Progress], Maska 2014), and “To Be or Not to Be? No, thank you,” in Lubitsch Can’t Wait: A Collection of Ten Philosophical Discussions on Ernst Lubitsch’s Film Comedy, which he co-edited with Ivana Novak and Jela Krecic (Slovenska kinoteka, 2014). Forthcoming by Duke University Press is Dolar’s latest book, The Riskiest Moment.

Mladen Dolar – “What Is Authority?” (Excerpt 2)

Mladen Dolar – “What Is Authority?”