Professor of Poetry at The European Graduate School / EGS. 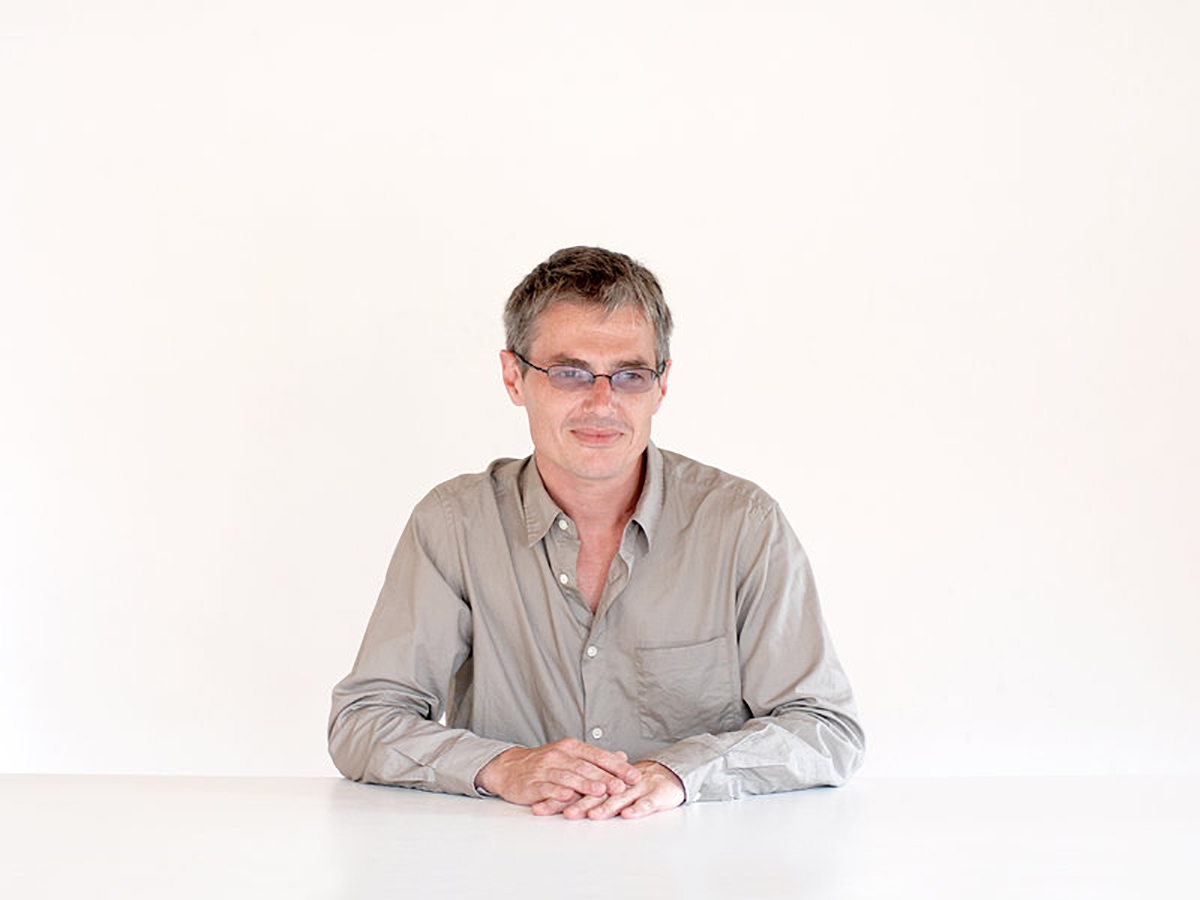 Pierre Alféri (b. 1963) is a French novelist, poet, and essayist currently based in Paris. In addition to being a professor of poetry at The European Graduate School / EGS, Alféri teaches at art schools in Lyon, L’ École des Beaux-Arts de Lyon, and in Paris, L’École des Arts Décoratifs de Paris and L’École Nationale Supérieure des Beaux-Arts de Paris.

Alféri earned a degree in philosophy at the University of Paris and published his thesis on William of Ockham (Guillaume d’Ockham le singulier) in 1989. Two years later Alféri published another philosophical essay on questions of language and literature, Chercher une phrase (1991), although he chose not to pursue an academic career in philosophy. Rather, his interest in language and philosophy led him to poetry, in which he has become one of the leading innovative French poets working today and has since published several books of poetry, including: Les Allures naturelles (1991), Le Chemin familier du poisson combatif (1992), Kub Or (1994), Sentimentale journée (1997), La Voie des airs (2004) as well as the novels Fmn(1994) and Le cinéma des familles (1999), and Les Jumelles (2009).

In several works, Alféri experiments with language formulas and reflexive writing without falling into the trap of empty lyricism. At the same time, he does not want to abandon the idea of composing a poem with a certain distance. For Alféri, prose is not a genre, nor is it the opposite of poetry. Instead, in his writing, all categories merge and stretch to compose a form that is constantly reinvented and connected to the surrounding world, while maintaining a critical distance. Alféri’s verse tends to be short and irregular, often using fast cuts and breaks, as if to signify the difficulty of achievement and the refusal to be chained up.

In one of his widely praised collections of poems, Kub Or (translated into English as Oxo by Cole Swensen), Alféri uses the concept of the bouillon cube, with each poem two-dimensionally reflecting a side of the cube. The book consists of seven poems; each poem is made up of seven lines, and each line is composed of seven syllables. Being not only a propitiatory number, a good omen, and a number of daily life, the number seven also challenges the dominant prosody in French poetry, and the use of even-numbered syllabic lines. This asymmetric meter produces cuts, surprises, and overlaps, as each poem describes an aspect of modern Paris in seven short lines. With their interest in the minutiae of modern life, these poems often focus on the media—cinema, TV, advertising—as well as the artifacts of low and high culture. Pierre Alféri takes the reader on a journey through the streets, commercial life, politics, and music of modern life, and examines to what extent the figures of the past inhabit the consciousness of the present. As a poet, he is not alienated, but always prepared to engage actively with the variety of experiences he encounters. Conversely, this engagement is expected from the reader as well—if the poems are bouillon cubes, the mind of the reader is the boiling water needed to dissolve them and fully taste modern life.

Every collection of Alféri’s poems takes the form of a particular story. In that sense, Sentimental Journey can be read as a mélange of paths, routes, and activities with seemingly no effect. The Anglo-Saxon inversion of the title invokes an American road movie from the seventies—neon lights, flashes, and LSD. On the other hand, the construction of verses resembles the editing of a film, underscoring the inspiration and affinity Alféri has with moving images. Expressive and diaphanous, this journey seems to be in search of its own map. Under the ironic titles of each poem, various events are described and then contrasted with blocks of displaced thoughts, creating language that is breathless and quick. In the end, it can feel like a memory of an unusual journey “into the history of the present, into the archeology of intimacy.”

In 1996, with his friend and fellow poet Olivier Cadiot, Alféri founded the Revue de Littérature Générale. Each of its two issues were more like a book, or a “digest,” as he and Cadiot diffidently put it, of poetic methods, mechanisms, ideas, and techniques, all aiming at a vibrant new conception of lyricism. Along with Cadiot and Anne Portugal, and to a certain extent Emmanuel Hocquard and Jacques Roubaud, Pierre Alféri is leaving behind the divide that has characterized French poetry since the 1980s, between, on the one hand, “poetry that sings” to an appreciable public and, on the other hand, an austere, abstruse, negative poetic sensibility (represented, for example, by Denis Roche or Jean-Marie Gleize). Pierre Alféri and his fellow poets, rather than deferring to a polemical style, are creating new, humorous, startling, and stirring lyrical energies, as exemplified by Alféri’s nightingale poems (from the collection La Voie de l’air, 2004) and by the “grunge ideas” of his 1994 collection Kub Or.

Nurturing collaboration with other artists, Pierre Alféri often performs with musicians, painters, and other poets. With Suzanne Doppelt, a photographer and fellow professor at The European Graduate School, he co-founded the literary review Détail, and with Olivier Cadio, he established La Revue de Littérature Générale. His collaboration with the sculptor Jacques Julien led to the production of the DVD Ca commence à Séoul (2007). Alféri has also written lyrics for the actress and singer Jeanne Balibar; he wrote two songs for Balibar’s 2003 album, Slalom Dame(“Cinéma” and “Ton Diable”), in collaboration with Rodolphe Burger, who composed the music. His own cinematic contributions have been edited and published as a DVD entitle, Cinépoèmes & films parlants (2003).

Throughout his career, Pierre Alféri has also been an active translator. He is well-known for his translations of works by John Donne, Giorgio Agamben, and Meyer Schapiro, as well as of the American objectivist poets George Oppen and Louis Zukofsky.

The mosquito and the moon

Paralogisms of Realism in Narrative Film

Images and Realism in Cinema

The Poet and the Nightingale 4/4

The Poet and the Nightingale 3/4

The Poet and the Nightingale 2/4

The Poet and the Nightingale 1/4