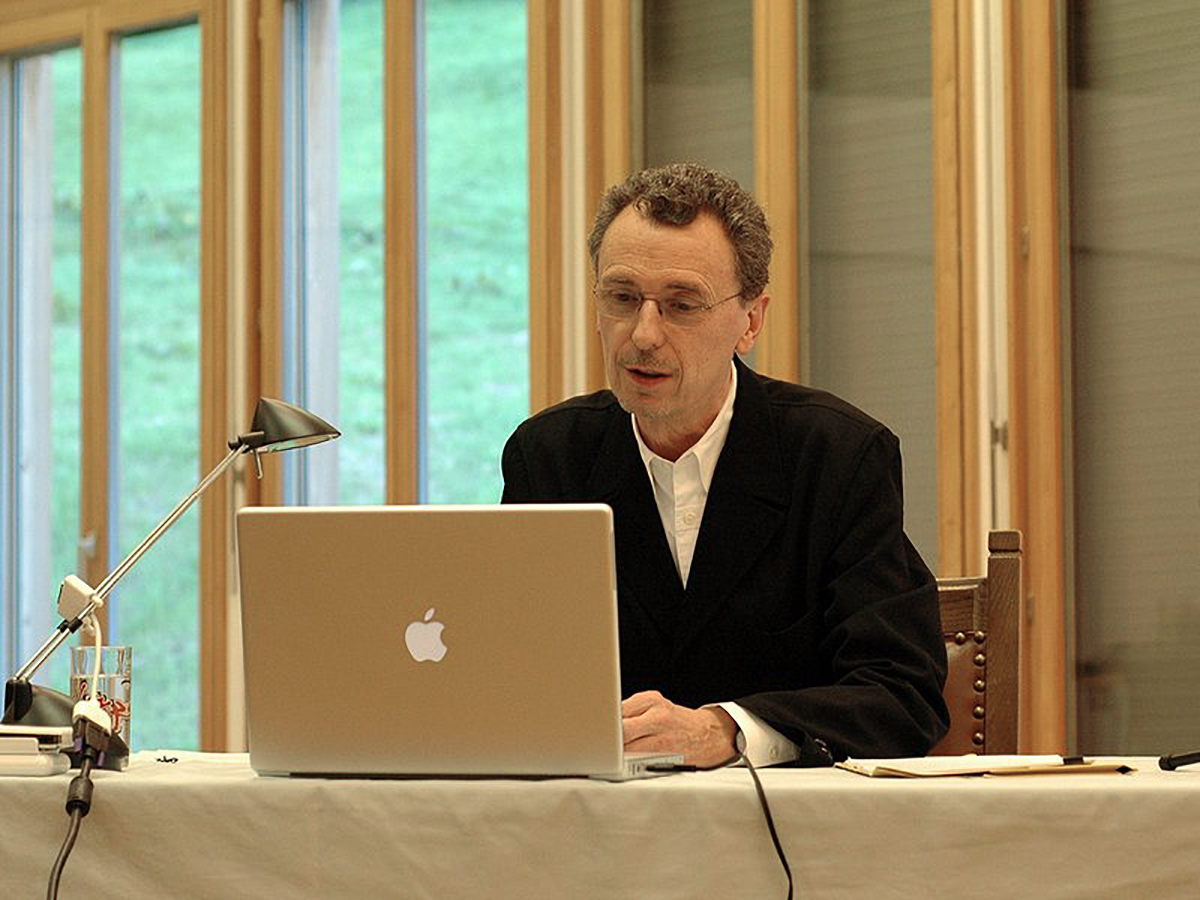 Victor Burgin (b. 1941) is a British artist, cultural theorist and photographer. He studied Painting and Philosophy at The Royal College of Art, London (1962-1965) and Painting, Sculpture and Philosophy at Yale University, New Haven (1965-1967). He taught photography at Nottingham Trent University (1967-1973) and then at the Polytechnic of Central London (1973-1988). Burgin was a Professor of Art History and Professor of History of Consciousness at the University of California, Santa Cruz (1988-2000) and currently holds the Emeritus Millard Chair of Fine Art at Goldsmith’s College, University of London.

Victor Burgin’s artistic work and his theoretical writings are often concerned with spatial and temporal relationships and with a tension between real (exterior) space and psychological (interior) space. Burgin claims: “To have an interest in the relation between real exterior space and psychological space is quite simply to be interested in the image. The ‘image’ is neither a material entity nor simply an optical event, an imprint of light on the retina, it is also a complex psychological process. It is in this sense that the image is defined as essentially ‘virtual’ in the phenomenological perspective that Deleuze derived from Henri Bergson. The ‘image-for-commerce’ is something that can be propped on an easel beside an auctioneer, something that can sit easily on the cover of a magazine, something that lends itself to becoming logo or brand. But the image is a different thing outside the circulation of commodities, outside the order of the spectacle – which is to say, outside of modern Western history. For example, in the Western tradition there are things – objects, ‘images’, whatever – and then there is the space between them, which is empty. In a certain Japanese tradition the space between – ma – is as tangible as any material thing and is as charged with sense. This is the place and the substance of the ‘image’ as I understand the term.”

In his works, Burgin also attempts to provide an answer to the question: how do memory and fantasy shape and distort real objects and actual space? This is why he also explores the relationship between words and images; a relationship that, according to Burgin, produces a “virtual” or “psychological” image. His work is influenced by many different theorists and philosophers, but the most important ones are Sigmund Freud, Michel Foucault, Henri Lefebvre, Andrè Breton, Maurice Merleau-Ponty, and Roland Barthes.

Victor Burgin is considered as one of the originators of Conceptual Art and his work appeared in such key exhibitions such as Live in Your Head: When Attitudes Become Form: Works, Concepts, Processes, Situations (1969-1970) at the ICA London, and Information (1970) at the Museum of Modern Art, New York. At this point of his career, Burgin was examining the difference between explicit and implicit meaning. Inspired by semiotics, film studies and psychoanalysis, he combined photographs and texts in an attempt to rework the language of mass media. He explored the codes and conventions of mass media, claiming that advertising images appealed to him because “they are used… deliberately in the service of ideology.” Therefore, in works like Framed (1977), from the US77 series, he attempts to subvert the Marlboro advertising campaign and, in Lei-Feng Series (1973-1974), every panel presents the same image from a commercial for sherry. This image is counterposed with the parable on Maoist worker Lei-Feng and in every panel Burgin also includes a commentary about the inter-relationship between the image and text. In Possession (1976), a series of posters with a man and a woman embracing was installed throughout Newcastle together with the following text: What does possession mean to you?/ 7% of our population own 84% of our wealth.” Other important works of this period include Room (1969), UK76 (1976), Zoo 78 (1978-1979), and Office at Night (1985-1986). In 1986, Burgin was nominated for the Turner Prize for his video and photographic works.

At the beginning of the 1990s, Victor Burgin turned to digital video and, through this form, he continued to use semiotic and psychoanalytic methods to examine the roles of memory and association in the perception of space, time, and photographic images. His projection work Elective Affinities (2000-2001) is based on his experience of space in Mies van der Rohe’s pavilion in Barcelona. Burgin claims that he tried to present “the place and time of all his work – where his internal world and the social and historical reality of the city intersect.” One of his more recent works, Hôtel D (2009), is also related to a specific site – the former hospital Hôtel-Dieu Saint-Jacques in Toulouse. According to Burgin, this is another work that brings to light one of the most important themes of his oeuvre: “Hôtel D, in common with all of my works in recent years, is an attempt to represent some unrepresentable ‘thing’ – in this case deriving from my being there, in the Hôtel-Dieu in Toulouse, and being aware of the lives and deaths of those who were there before me, aware of the past function of the building, and at the same time aware of the forms of the architecture, of the time it takes to cross the room – everything, in fact, at the same time, including the connotations and fantasies that accompanied my perceptual experience and knowledge of the place.”

In recent years, Burgin has also become interested in computer programs and has started to use them in his works. A Place to Read (2010) was Burgin’s response to the ongoing pursuit of private profit that threatens to destroy the most beautiful and historically rich architectural sites in Istanbul. This work includes a virtually re-created coffee house that was destroyed in the late 1980s so that a modern restaurant could be built in its place. With the help of 3D modeling, A Place to Read re-creates this demolished building and the combination of this virtual panorama with lines of text enables Burgin to formulate a poignant critique of Western globalism and commercialization.

Victor Burgin has published numerous books and essays on art theory and criticism. His most important theoretical books include: Thinking Photography (1982), The End of Art Theory: Criticism and Postmodernity (1986), In/Different Spaces: Place and Memory in Visual Culture (1996), The Remembered Film (2004), Situational Aesthetics (2009), Parallel Texts: Interviews and Interventions About Art (2011).  In addition to his theoretical works, Victor Burgin has also written a number of “hybrid” publications that defy genre classification: Commentary (1973), Between (1986), Some Cities (1996), Venise (1997), Voyage to Italy (2006), and Components of a Practice (2008).

The field of Representation