Jacques Derrida Chair and Professor of Philosophy at The European Graduate School / EGS. 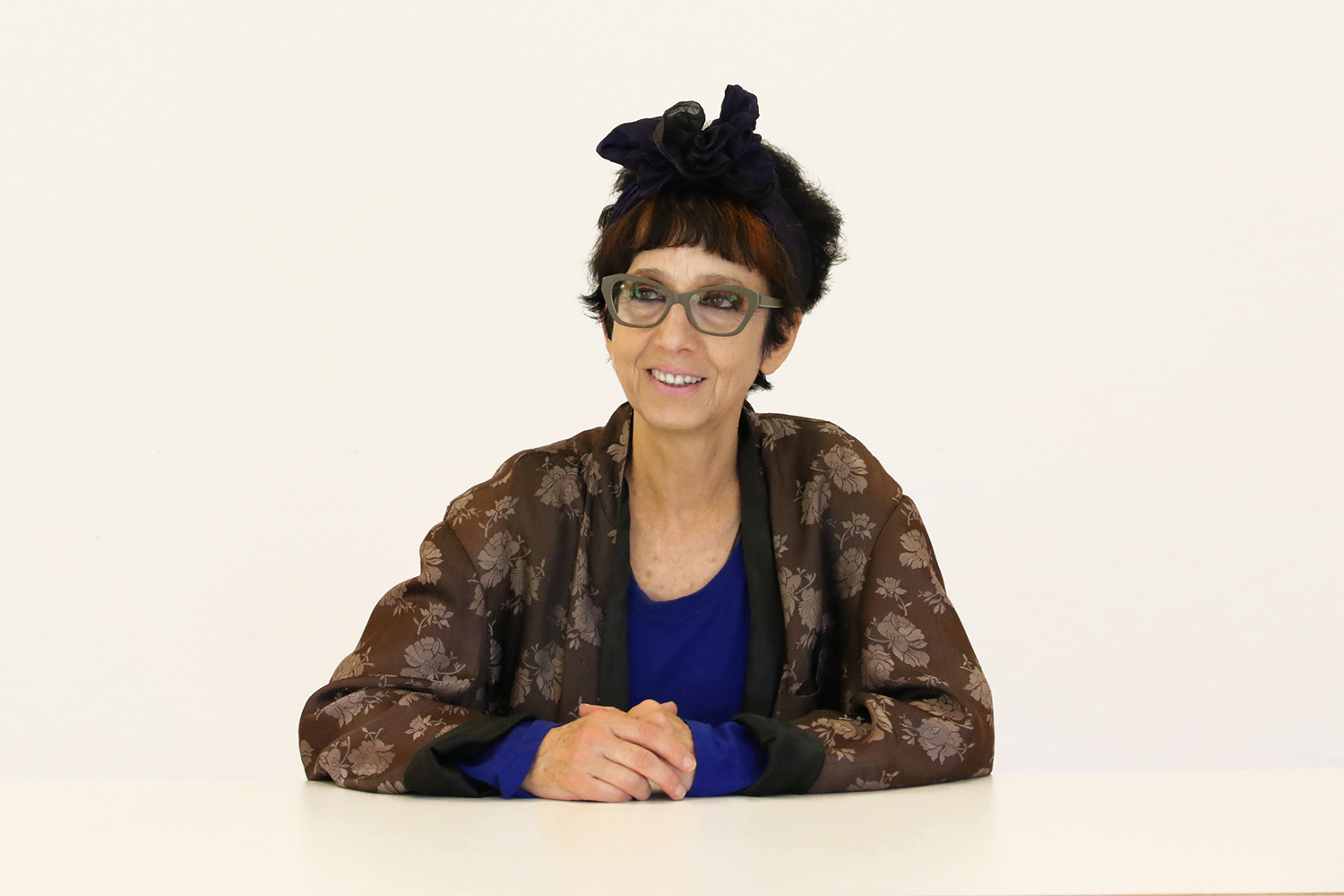 Avital Ronell (b. 1952) is the Jacques Derrida Chair and professor of philosophy at The European Graduate School / EGS, as well as University Professor of the Humanities and Professor of German, Comparative Literature, and English at New York University.

Born in Prague to Israeli diplomats, Ronell emigrated to New York in 1956. She completed a Bachelor of Arts at Middlebury College, and then went on to study with Jacob Taubes and Hans-Georg Gadamer at the Hermeneutics Institute at the Freie Universität Berlin. Ronell returned to the United States and continued her studies at Princeton University, where, under the supervision of Stanley Corngold and with a thesis entitled The Figure of Poetry: Self-reflection in Goethe, Hölderlin, and Kafka, she received a PhD in Germanic languages and literature, in 1979. After completing her doctorate, Avital Ronell moved to Paris in order to study directly with Jacques Derrida and Hélène Cixous. After her years of study in Paris, she assumed a number of professorships at various universities in the United States, including the University of Virginia, the University of California, Riverside, and the University of California, Berkeley. In 1995, she returned to New York to assume her post at New York University. Avital Ronell has been the recipient of a number of prestigious awards and fellowships, including: Alexander von Humboldt-Stiftung Fellowship (1981–1983), American Cultures Fellowship (1991), Research Fellow Award (1993), and the University of California’s President’s Fellowship (1995–1996). Further, she has served as chair of the Division of Philosophy and Literature and chair of the Division of Comparative Literature at the Modern Language Association, from 1993 to 1996.

In 2009, the Centre Pompidou invited her to hold a series of conference performances with artists and philosophers such as Pierre Alferi, Werner Herzog, Judith Butler, Laurence Rickels, Jean-Luc Nancy, and Suzanne Doppelt, among others. The project went under the title: Selon… Avital Ronell (According to… Avital Ronell).

In October 2015, Ronell was presented with the prestigious insignia of Chevalier of the Order of Arts and Letters by the French Minister of Culture.

As one of the first English translators of Jacques Derrida’s work, Avital Ronell is widely credited as one of the primary figures introducing his work to English speaking audiences—and American academia more specifically. While Derrida is certainly the over-whelming influence on Ronell’s work, she is in constant dialogue with a number of philosophers and theorists, including Friedrich Nietzsche, Martin Heidegger, Emmanuel Levinas, or Maurice Blanchot, to name but a few. While her work is often considered as deconstructive, Derridean, Heideggerian, post-feminist, post-structuralist, or psychoanalytic, Ronell’s thinking and writing works beyond these labels remaining utterly singular and thoroughly transgressive.

Ronell’s texts are remarkable both for what they say and for the extraordinary way in which they say it. As in her most infamous book, the Telephone Book: Technology, Schizophrenia, Electric Speech (1989), Avital Ronell seeks to undermine and “address,” through direct intervention, commonly held views of the addressee and the author. Exploiting typography, Ronell’s texts seem to explode from the page. Illegible in instances, the texts mimic the dislocating and alienating nature of the fractured telephone conversation questioning the role of both author and reader.

In her first book, Dictations, Ronell tells us that she “has never entertained any illusions concerning the objective nature of scholarship, no matter how tedious or dusty it can appear to be.” Each of her works goes after a seemingly recognizable and knowable signifier (Goethe, the telephone, the drug addict, the television, the test, the greeting, stupidity, etc.) but then tracks it so closely that it quickly becomes unrecognizable, exceeding its object-status, overflowing itself as a concept. Explicitly breaking with scholarly tradition, a tradition that values mastery and certitude, Ronell engages her “object” of study at the level of its finitude, of its radical singularity.

In Stupidity, for example, Ronell begins with the concept of stupidity, tracking it through poets and novelists and philosophers and literary/critical theorists, and pre-schoolers—but the closer she gets to it, each time, the more it exceeds itself as a concept. The closer she brings us to it, the more unknowable it appears. It is thus that Ronell, as she puts it in Loser Sons (19), “abide[s] with the weaker neighborhoods of thought, where things do not always work out or offer the narcissistic comfort of landing in the vicinity of secured sense.”

It would be a mistake, however, to assume that there is no imperative to understand in Ronell’s work; clearly, her work is driven by that imperative. It’s just that what goes by the name “understanding” gets a radical update in her work inasmuch as she determines not to wipe out (objectify) the “object” of this “understanding” in the very rush to pin it down and define it. The link that academe posits and propagates between rigor and certitude (the former leading to the latter) gets busted in Ronell’s works, which are always incredibly rigorous and theoretically sophisticated interruptions of certitude. As she notes in an interview in JAC [1], she approaches her “object” of inquiry not as a police officer going after a suspect but in detective mode, turning in her badge and assuming a different rapport with the truth, one that involves breaking with standard (academic) procedure in order to remain attuned to finite singularity, in order to refrain from infinitizing finitude (as she put it in Finitude’s Score: Essays for the End of the Millennium, 1994).

Another striking aspect of Ronell’s work is its attentiveness to the materiality of language—that is, to the sound, shape, size, beat or rhythm, etc. of the words themselves. Words inevitably go AWOL, bagging their referential duty and going off on their own, connecting not to the idea they are supposed to represent but to other words—and making all kinds of “noise” while they’re at it. Ronell affirms this noise, amplifies it, and asks us in The Telephone Book to learn hear it by learning to read with our ears. If a foundational approach to language acknowledges that the word negates the actual “thing” in order to bring an operational concept into being (which implies a triumph for the subject over the “world,” for “meaning” over “chaos”), Ronell’s nonfoundational approach embraces a language that goes on to obliterate the concept, too, by ignoring and/or exceeding it, sparking a proliferation of meaning in discourse. From this perspective, it is language that triumphs over the concept, including the concept of “the subject,” infinitely and indiscriminately breeding meanings that detach from the writer’s intentions and that remain inappropriable to any single interpretation. Ronell embraces the materiality of language very explicitly, cranking up the noisy texture of the words themselves through wildly unconventional page design and an in-your-face typographical performance. Inasmuch as it showcases language’s double negation, this textual performance amounts to a destructive affirmation—or an affirmation of destruction—no doubt about it. Still, Ronell’s work steers clear of “undeveloped pronouncements of nihilism,” and in Stupidity she reminds her readers of the “Heideggerian distinction between destruction and devastation.” “Destruction,” she says, “involves the force of a critical clearing and does not imply the shell-shock stoppage of devastation”(p. 122). In the opening pages of Finitude’s Score, she more thoroughly sketches out this distinction: whereas devastation “has to do with a fundamental shutdown,” a “pathological” drive toward “a telic finality or fulfillment or the accomplishment, once and for all, of a Goal,” destruction, Ronell says, is “a decisive doing away with that which, already destroyed, is destructive in its continuance. To the extent that it is possible only on the basis of a new and more radical affirmation, destruction, moreover, has pledged itself to the future” (Finitude’s Score xiii).

Ronell’s work is relentlessly destructive, relentlessly turned toward futurity, and it throws its disorienting smack in the name of what she calls “responsible responsiveness.” Whatever the topic at hand, Ronell’s overarching concern is with an “ethics of decision” for this postfoundational era—an era in which all the transcendental navigation systems are down: “To the extent that one may no longer be simply guided—by Truth, by light or logos—decisions have to be made.” It’s only in certitude’s interruption that meaning’s inappropriability is exposed; and it’s only in that exposure that an ethics of decision becomes available: as Ronell reminds us, “no decision is strictly possible without the experience of the undecidable” (Crack Wars 58).

Ronell, Avital. “A rouge preface,” Preface to The Making of a Terrorist : On Classic German Rogues, by Jeffrey Champlin. Northwestern University Press, 2015. ISBN: 0810130106

The Sujet Suppositaire: Freud and the Rat Man

Doing Kafka in the Castle: A Poetics of Desire

The Response of Ulysses

The Ear of the Other: Autobiography, Transference

Ronell, Avital, and Peggy Kamuf, trans. The Ear of the Other: Autobiography, Transference, by Jacques Derrida. Edited by Christie McDonald. University of Nebraska Press, 1988. ISBN: 0803265751

The Law of Genre

Lust for Life: On the Writings of Kathy Acker

Have I Been Destroyed? Answering to Authority and the Politics of the Father

Nietzsche Loves You: A Media-Technological Start-up

Surrender and the Ethically Binding Signature: On Johnson’s Reparative Process

Special Topic: On Poetry – On the Misery of Theory without Poetry: Heidegger’s Reading of Holderlin’s “Andenken

Ronell, Avital. “Special Topic: On Poetry – On the Misery of Theory without Poetry: Heidegger’s Reading of Holderlin’s “Andenken.” Publications of the Modern Language Association of America Vol. 120, No. 1 (2005): 16.

Koan Practice or Taking Down the Test

Proving Grounds: On Nietzsche and the Test Drive

The Experimental Disposition: Nietzsche’s Discovery of America (Or, Why the Present Administration Sees Everything in Terms of a Test

Ronell, Avital. “The Experimental Disposition: Nietzsche’s Discovery of America (Or, Why the Present Administration Sees Everything in Terms of a Test).” American Literary History Vol. 15, No. 3, Autumn (2003): 560-574.

The Uninterrogated Question of Stupidity

Ronell, Avital. “Support Our Tropes II (Or Why in Cyburbia There Are a Lot of Cowboys).” Yale Journal of Criticism 5, Spring (1992).

Opera and Technology: Scoring on the Telephone

The Worst Neighborhoods of the Real: Philosophy-Telephone-Contamination

Ronell, Avital. “The Worst Neighborhoods of the Real: Philosophy-Telephone-Contamination.” Differences: A Journal of Feminist Cultural Studies 1 (1989): 125-145.

Queens of the Night: Nietzsche’s Antibodies

A crisis in immaturity

The EGS and its students as warrior scholars

Dissecting the paraconcept of the complaint

Arendt’s acceptance of the Lessing Prize

Walking as a philosophical act

Douceur and the Idiot

Fighting Theory and Douceur or Sweetness

On writing a dissertation

Inside and Outside the High

Laws of Encounter: The Greeting

Kafka and the Sublime

Test Drive: The Test, and Testing

The Event of the Encounter, The Other

Kafka’s Before The Law: Law of The Father

Kafka and The Test, The Call, The Servant

Kafka’s Letter to His Father. The Call

Kafka’s The Test: The Guest-Ghost

The Shock of Puberty

Heidegger and the Question of Technology