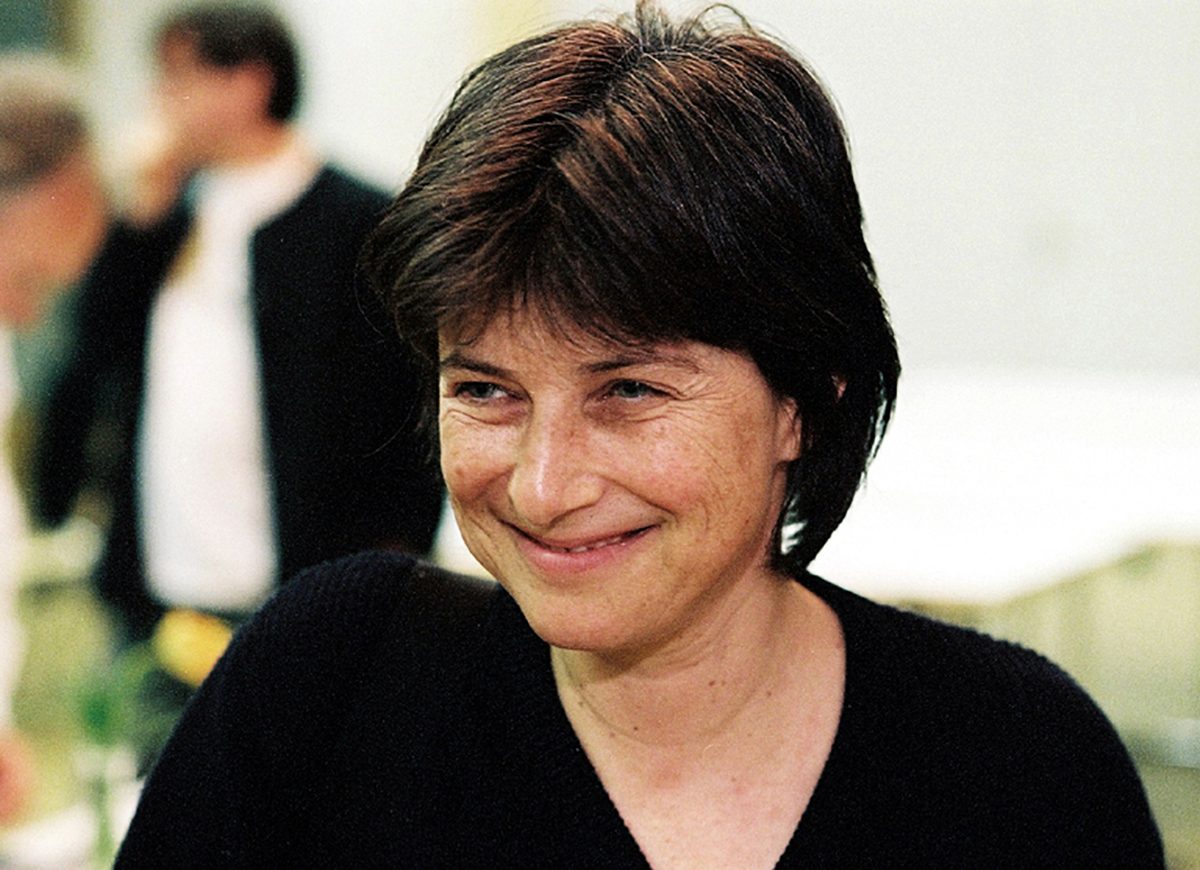 Chantal Akerman (*1950 in Brussels, † 2015 in Paris) was a filmmaker, writer, and artist. Film scholar Gwendolyn Audrey Foster [1] considers her “one of the most important filmmakers of the late-20th century, whose films have had a profound impact on feminist discourse within the cinema, and within avant-garde film and video art at an international level.”

Akerman’s first feature film entitled Je, tu, il, elle / I, You, He, She (1974) has been labelled her “most sexually audacious film”[2]: “The commas in the title suggest corporeal and spatial displacement, and this becomes the subject of Akerman’s narrative triptych. In intimate but enervating encounters, the director-actor attempts to locate a meaning in routine – first an insistence upon it, and then a decisive break.”[3]

Her next film, Jeanne Dielman, 23 quai du Commerce, 1080 Bruxelles (1975) traces the daily routine and ordinary life of the Belgian housewife and prostitute Jeanne. In what was probably her last interview, Akerman affirms: “I do think it’s a feminist film because I give room to the things that were never, almost never, shown in that way. Like the daily gestures of a woman, which are the lowest in the hierarchy in movies… That’s one reason why I think it’s a feminist film. And because of the style. Not as much because of the content. But the fact that I wanted to show those gestures as precisely as I could… If you do that it is because you love them. In some way you recognize those gestures. They were always denied and ignored. I really think that the problem with women’s films, usually, has nothing to do with the content”[4].

Akerman situates herself precisely on the margin: “And one could say that I’m on the border between so-called experimental film and narrative film and that I travel from one to the other. And I’m here, but I could be elsewhere.[5]

In her documentary Dis-moi / Tell me (1980) Akerman interviewed female Holocaust survivors (including her mother).“’I don’t have much to tell you,’ each woman begins, before delivering a hyperthymestic spiel on her experience during and after the war.”[6]

Her film Histoires d’Amérique / American Stories, Food, Family and Philosophy from 1989, portraying Jewish New Yorkers, was screened at the Berlin International Film Festival in the same year. There, she served as a member of the jury in 1991.

In 1996, Akerman directed the more mainstream romantic comedy Un divan à New York / A Couch in New York with William Hurt and Juliette Binoche, which gained mixed reviews. 3 years later, Akerman released the documentary Sud / South, a documentary examining the lynching of a black man in Jasper, Texas. According to Foster, “Sud is less than roughly seventy minutes long, yet it has the impact of films such as Alain Resnais’s Night and Fog (1955) or Henri Georges Clouzot’s Wages of Fear (1953). It is minimalist in its number of shots and sequences, but this only makes the overall impact of the film all the more compelling. Akerman uses silence and ambient sound to draw the viewer into a subjective state of understanding.”[7]

In 2000, Akerman completed an adaptation of Proust’s La Prisonnière (book five of “Remembrance of Things Past”), La Captive / The Captive—according to Melissa Anderson “[o]ne of the finest literary adaptations ever made.”[8] In 2003 and 2009, she directed documentaries about her wife: Avec Sonia Wieder-Atherton (2003), a calm portrait, and À l’Est avec Sonia Wieder-Atherton (2009), following the cellist on tour.

While Demain on déménage / Tomorrow We Move (2004) was another attempt at a more mainstream film, Akerman’s last feature, La folie Almayer / Almayer’s Folly (2011) — based on Joseph Conrad’s novel—received mixed response:“’Almayer’s Folly’ is not friendly terrain to traverse; like some sinister version of Proust, it is a prolonged fever dream that ultimately yields madness”[9], as pictured by Nicolas Rapold.

Akerman’s last film, No Home Movie (2015), is a documentary about her dying mother—for which Andrea Picard observes: “In No Home Movie, it is as if Chantal Akerman, perhaps for the first time in her career, has revealed the core of her work and her wounds in the most naked of ways: her frequent focus on confinement, repetition, and confrontation; her longing to be elsewhere […] No Home Movie is a shattering contemplation of loss and grief as much as it is a search for identity and calm, for rootedness from a perpetually nomadic, breathless soul. It is not a home movie: it is a movie about having no home.”[10]