Professor of Cultural Analytics at The European Graduate School / EGS. 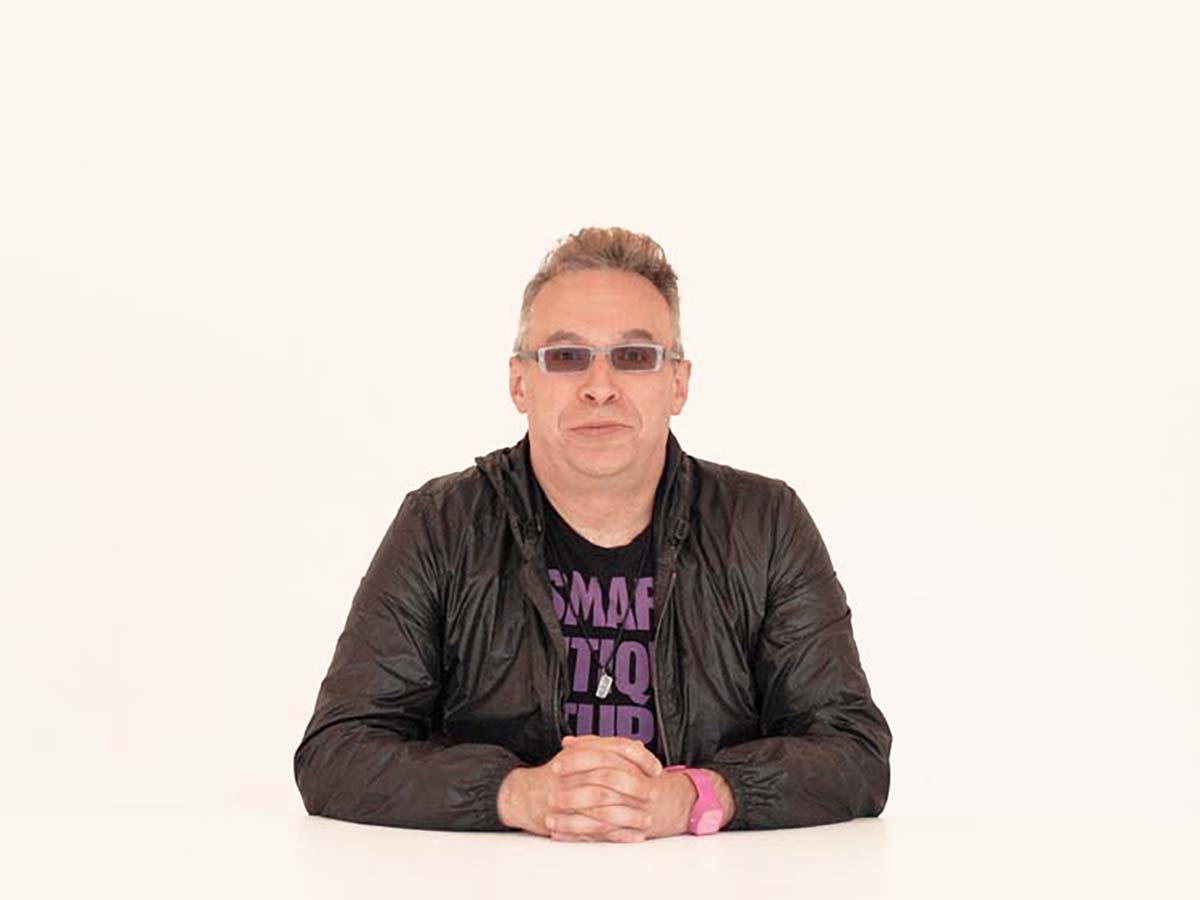 Lev Manovich (b. 1960) is both an artist and one of the leading theorists of digital culture and media art. He is the author of a number of books, including Software Takes Command (2013), Soft Cinema: Navigating the Database (2002–2005), and The Language of New Media (2001), which has been widely acknowledged as “the most suggestive and broad ranging media history since Marshall McLuhan.” At the moment, Lev Manovich is a professor at the City University of New York, the director of the Software Studies Initiative—which works on the analysis and visualization of big cultural data—and a professor of cultural analytics at The European Graduate School / EGS. In 2013, he was included in the list of 25 People Shaping the Future of Design; whereas, in 2014, he was recognized as one of the 50 “most interesting people building the future” by The Verge.

Manovich graduated from the Moscow Institute of Architecture in 1979 with a degree in civil architecture. In 1983, he enrolled in the Tisch School of Fine Arts, where he attained a BA in the Department of Film and Television. In 1988, he received an MA in experimental psychology from New York University, after which he was a graduate student exchange scholar at Cornell University, from 1991 to 1992. Finally, he received a PhD from the University of Rochester in 1993, in Visual and Cultural Studies, with a dissertation titled: The Engineering of Vision from Constructivism to Virtual Reality, under the supervision of Mieke Bal and Norman Bryson. Since finishing his PhD, Manovich has taught at the University of Maryland; the University of California, San Diego; and the Graduate Center at CUNY. In addition to these posts, he has also taught at The European Graduate School / EGS, the Centre for Cultural Studies at Goldsmiths College, University of London, the Gothenberg Art Academy, the Institute of Creative Technologies at de Montfort University, the University of Seigen, and many others.

Of the several books Manovich has published since 1993, The Language of New Media (2001) is certainly the most significant, since it was “the first rigorous and far-reaching theorization of the subject” and continues to be one of the fundamental texts in the field. In The Language of New Media, Manovich places new media within the history of visual and media culture of the last few centuries, thereby revealing both its roots and innovations. In brief, Manovich argues that new media relies on many of the conventions of old media, including the rectangular frame and mobile camera, and suggests that new media functions to create an illusion of reality, address the spectator, and represent space. The book also investigates and analyzes forms unique to new media, such as the interface and database. In more detail, the book develops and describes the general principles underlying New Media: numerical representation, i.e., new media objects exist as data; modularity, i.e., different elements of new media exist independently; automation, i.e., new media objects can be created and modified automatically; variability, i.e., new media objects exist in multiple versions; and transcoding, i.e., the logic of the computer influences how we understand and represent ourselves. Further, The Language of New Media provides a series of elementary definitions of new media: new media as opposed to cyber culture; new media as computer technology and as a distribution platform; new media as digital data controlled by software; new media as the mix between existing cultural conventions and the conventions of software; new media as the aesthetics that accompanies the early stage of every new modern media and communication technology; new media as faster execution of algorithms previously executed manually or through other technologies; new media as the encoding of modernist avant-garde; new media as metamedia; and new media as a parallel articulation of similar ideas in post-WWII art and modern computing.

Aside from book length publications, Lev Manovich has written over 120 articles, which have been published in over thirty countries. Finally, since 1999, he has given over 600 lectures, seminars, and master classes in North and South America, Asia, and Europe.

Over the entirety of his work, Manovich is credited with the development of a number of fundamental ideas, concepts, and methodologies, including: database and cultural analytics. In brief, the concept of database was introduced in a 1998 article “Database as a Symbolic Form,” wherein Manovich opposes it to narrative forms, which were the principle methods of organizing cultural expression, and points out the web’s overwhelming privileging of and dependence on the former. The two, in fact, are—according to Manovich—antithetical. One characteristic of a database is the organization of data in isolation—or outside of a narrative context—thereby, making all data of equal importance. The database, in consequence, becomes something like a meta ready-made with the potential to destabilize all petrified forms, ideas, and narratives and materialize into a system of endless of possibilities. This form, however, is not an absolute liberation, but it imposes a different set of limits and possibilities than those of narrative forms. At that time, Manovich also focused on the related concepts of paradigm and syntagm, arguing that new media has forced a reversal in their traditional relationship; namely, instead of syntagm being explicit and paradigm implicit, now it is the paradigm (database) which has material existence and the syntagm (narrative) which is de-materialized.

Cultural analytics, on the other hand, is a methodology that makes possible the tracking of developments in our cultural imagination. The expansion of digital culture has caused a significant increase in the number of cultural agents worldwide, the consequence of which has been that the old theoretical tools for tracking and understanding such developments are no longer adequate for the data. Manovich’s suggestion has been—and continues to be—to appropriate software from science and apply the techniques of data mining and interactive visualization within the humanities. According to Manovich, “culture has become data”; thus, the proper study of culture demands the use of software to: analyze cultural artefacts; visually represent patterns, data sets, and flow; and interactively explore the results. In consequence of the change of form at stake, the study of single events has become futile; it is necessary to begin studying trends and patterns in culture and, thereby, perceiving individual projects in a larger context of global cultural production. For instance, when considering historical data, cultural analytics allows us to map all that remained outside of the standard canon of some field and, thereby, present historical developments without bias to names but defined by the larger patterns of cultural activities and dispositions. Manovich, however, does not promote cultural analytics as the only method for understanding the humanities—both in the present and in their historical development—but sees it as a methodology that can partner with, or supplement, other available tools and methods. In short, the idea is that it is only by combining more traditional methods with data analysis that it will be possible to understand the historical developments of the humanities as well as make rational predictions on future developments.

In addition to theoretical work, Manovich has been working with computer media as an artist, computer animator, designer, and programmer since 1984. He is, therefore, not only a theorist, but a practicing theorist and artist. In fact, the majority of his theoretical works—i.e., books, articles, lectures, etc—have been accompanied by and experimented with art projects. His projects and exhibitions stretch over twenty years, and include: On Broadway (2015), Selfiecity (2014), SelfieSaoPaulo (2014), Taipei Phototime (2014), The Exceptional and the Everyday: 144 hours in Kyiv (2014), Photorails (2013), Manga Style Space (2010), TimeLine (2009), Mission to Earth (Soft Cinema Edition) (2003–04), Global User Interface (Soft Cinema Edition) (2002–03), Freud-Lissiitzky Navigator (1999), and Little Movies (1994–97). These and other projects have been presented at the New York Public Library (NYPL), Google’s Zeitgeist 2014, Chelsea Art Museum (New York, US), ZKM (Karlsruhe, Germany), The Walker Art Center (Minneapolis, US), KIASMA (Helsinki, Finland), Centre Pompidou (Paris, France), ICA (London, UK), and Graphic Design Museum (Breda, The Netherlands).

Examples and Techniques in Information Visualization

Interactivity and Dialogue in New Media 11/11

Interactivity and Dialogue in New Media 10/11

Interactivity and Dialogue in New Media 9/11

Interactivity and Dialogue in New Media 8/11

Interactivity and Dialogue in New Media 7/11

Interactivity and Dialogue in New Media 6/11

Interactivity and Dialogue in New Media 5/11

Interactivity and Dialogue in New Media 4/11

Interactivity and Dialogue in New Media 3/11

The Future of Theory 6/6

The Future of Theory 5/6

The Future of Theory 4/6

The Future of Theory 3/6

The Future of Theory 2/6

The Future of Theory 1/6